The Wheel of Time's conclusion, plus a new toy

So I've finally joined the modern age and bought myself an eReader. Nook have had a bit of a fire sale and are selling a pretty decent device for a wholly reasonable £29!

I've been toying with getting an eReader for a while but it had previously been difficult to justify spending lots of money on something that I don't really need. It's a great little device and I've tested it out by finally finishing off The Wheel of Time…

The Wheel of time

…is a ridiculous fantasy series. I received the first wheel of time book for Christmas a few years back and was hooked. I went through it all, book after book, until finally (in about October of that year) I arrived at the last book just in time for the first of Brandon Sanderson's efforts, "The Gathering Storm" (The author Robert Jordan died before the series was complete, leaving the remainder in the hands of another). The scale of these books is the most impressive thing:

The Wheel of Time is notable for its length, its detailed imaginary world, its well-developed magic system and a large cast of characters.

A good way to see this is Wikipedia's table of books in the series. Clocking in at over 4 million words, reading the series is no trivial endeavour.

The final book has been eagerly anticipated by anyone that enjoys the series (especially, I imagine, those that have been reading it since the first book was released more than 23 years ago). But A Memory of Light is a fitting first book for my new toy because it is also one of the main reasons for me getting an eReader in the first place. This Twitter rant was prompted by my incredulity that despite being released on the 8th Jan 2013 it wouldn't make it to (the cheaper and much more sensible) paperback until Dec 2013:

It's no wonder people buy Kindle books when publishers leave it a year to release the paperback. Who wants to buy a hardback brick?

Impressions of the book

The book far exceeds my expectations, especially since I haven't found Brandon Sanderson's books in the series quite up to scratch so far. For me part of the charm of the series is the glacial pace the books move at. With this unusually slow pace came an unparalleled attention to detail and an incredible sense of immersion. In contrast books 12 and 13 feel rushed, as if the author was trying to get through all the plot rather than telling the story of the world. I suspect to some extent, this is exactly what was happening. Even at this quickened pace, the final three books combined contain nearly a million words which is a lot considering the original plan was to finish the story with a single book.

But this book is, by the very nature of the events it depicts, a much more focused affair. Characters that have spent thousands of pages drifting apart are pulled back together for Tarmon Gai'don, the final battle.

Of particular note is that this is beneath all The Wheel of Time specific stories, this book is a fantastic account of war on an enormous scale. Many books in the genre deal with battles of varying size but this book is about a conflict that transcends mere battles. The sense of scale is just right and Sanderson's faster pace fits perfectly with the frantic confrontation.

It's generally a satisfying conclusion although the latter stages of the book contain some of the weaker material. There are sections that exist only to tie off plot points that for me could have done with a deeper resolution. Given how many balls were in the air it's still an incredible feat to have finished the series so well.

So in summary, if you gave up on the series after Jordan's death, I'd argue it's worth returning to read this gripping finale. It's a great read and certainly as good an ending as any Wheel of Time fan could have hoped for. 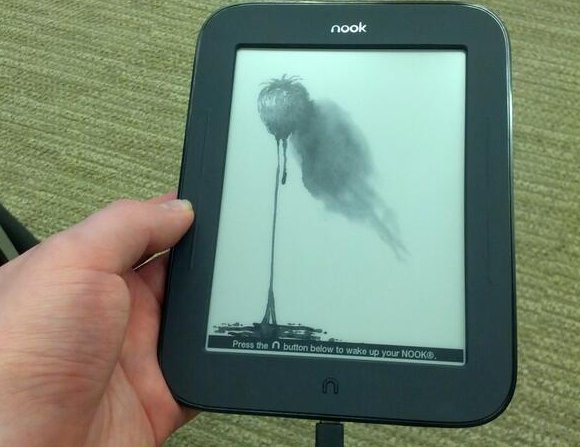 eReaders are a great way to read books. Until recently I was still buying physical CDs where possible because I quite like cluttering my flat up with stuff I don't need. I feel the same way about books, perhaps to an even greater extent. A well-stocked bookshelf (ideally made of rich mahogany) is the cornerstone of civilised man.

But I think that battle has already been lost. I now exclusively buy DRM-free mp3s and reading books on an eReader is just better than reading it in a book.

There are still a few ways that reading books the modern way is less good.

The first point is more of an issue in the silly fantasy books that I typically read but for such books it's actually very annoying. This is a problem that can be fixed with better software. The device just needs a better UI for this common use-case of jumping between the page you're on and something else in the book. It's only a matter of time until someone nails it.

The layout issues may be specific to this book so I'll have to see if it's a general problem. This isn't really a big deal but in any case it can be fixed by the publisher taking a bit more care over the electronic version of the book. As eBooks continue to become the dominant way of consuming novels this will happen naturally.

On the Nook specifically

While Kindles are fantastic devices I'll admit it is nice not to be tied into Amazon's walled-garden. The Nook Simple Touch is just a heavily-skinned Android device with an e-paper screen. With a little bit of tinkering I can make the device my own, which also means I'd be able to install the Kindle app and any other eBook software that runs on Android (or Angry Birds). I haven't done so yet but I do think it's important to choose devices where this is an option at least. One problem with moving from physical media with simple definitions of ownership into the modern age of abstract goods is that it can often entail a corresponding loss of control and ownership. A Kindle is figuratively and literally a little piece of Amazon that sits in your house and follows you around all day every day. The only way to consume the content that you've bought is via the Kindle and if the software on that device isn't controlled by you then it is (increasingly) likely to be doing things that aren't in your best interests.

It's not quite as compact as a Kindle and it is a previous-generation device. However, at £29 this is a no-brainer. I can't recommend it highly enough!