BASIC was 50 the other day! I shared some happy memories on the Guardian but I thought I should go into a little more detail here on my own site. Apart from anything else, you'd miss all the links if you only read the Guardian version ;-)

I'm a software developer, and probably wouldn't be here now without BASIC.

My primary school was lucky enough to have a few BBC Micros lying about for students to use. Most evenings I'd have a few hours after school, and from time to time I'd use that to dabble with the computers. The main difference between the simple computers of those days and what we have now was that there was nothing except what you wrote. The computer started up and gave you a blank command prompt ready for your commands - without the distractions of a modern computer.

I started off with the simplest programs. One that would generate times-tables, and some would ask questions of you and then show you messages or offer advice. After a while I grew bolder and wrote what is perhaps the finest (certainly the naughtiest) program of my lifetime: It would sit idle with a blank screen for some pre-determined length of time, when it would suddenly erupt with constantly scrolling coloured gibberish. I left that running at the end of the day once or twice in the hope it would give the cleaners a surprise.

Those skills turned out to be useful at college. I studied maths and the graphics calculator I bought let me write programs using a simple Basic dialect. 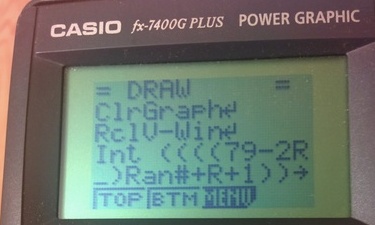 Here emerged a new chapter in my programming. I wrote programs to do my homework for me, little utilities to play tricks on my friends and devised some games. I even put a slow-loading screen at the start of one game to make it seem more complicated than it was.

BASIC isn't a good programming language. Created to make it easy for people without a technical background to get into programming, it lacks the features and expressivity of much older languages. But this low barrier to entry is one of the things that has made BASIC special. The feeling of getting a computer to do your bidding is wonderful and the way you've got there is less important than the way that it changes you. With the inclination, learning to program isn't particularly difficult. The Internet is filled to the brim with tutorials, lessons, and even entire university courses. At the time BASIC represented an easy way to experience the thrill of programming and perhaps it provided some people the initial spark to start them down the path to becoming a programmer.

After college I continued to study maths and it was a few years before I got into programming properly, but looking back the seeds were always there - and it was BASIC that nurtured them.